A community of 4.6 billion

This webpage takes up about 1 megabyte of space on our server.
For context, that’s only about 1/8000th of a USB thumbdrive you might have in your pocket. You could save this page a thousand times before reaching a gigabyte of storage – a measure we’re more used to seeing these days. This page – and the server it sits on – could be imagined as a grain of sand on a beach that is the internet. There isn’t an upper limit to the amount of data the internet holds. (unless you start counting how much copper we have to make circuit boards) The internet just keeps growing. From a humble server for sharing scientific papers to the global network of systems we see today.

In 2020, the amount of data on the internet hit 40 zetabytes. A zetabyte is about a trillion gigabytes.

One way to estimate the size of the Internet is to look at the amount of information consumed by web traffic. According to Cisco’s annual Global Web Traffic Report, annual global web traffic exceeded a zettabyte (ZB) for the first time in 2015. By 2025, it’s expected to hit 175 ZB.

It’s estimated that 50 billion devices are connected to the Internet, and Cisco estimates that global IP traffic has grown to 2.3 billion in 2020, with more than 1.5 billion more people going online, bringing the global Internet community to 4.6 billion people.

As we have faster and faster Internet connections, developers tend to focus less on creating efficient websites and online experiences, and more on providing visually engaging sites such as social networks, social media, and video games. These kind of websites give rise to a change in developer philosophy. In the past, we cared about optimising the internet to ensure lower-spec hardware could load pages fast enough. Today, we stream high-resolution, high-framerate video without even a second thought.

Zettabyte has been a benchmark that analysts have targeted as a key connectivity milestone since day one, and it is one of the key metrics in Cisco’s annual Global Web Traffic Report.

By June 2019, the indexed web was 5.85 billion pages, and that is just the activity that search engines are reaching. Many pages on the internet are not indexed and the unseen depth of the internet is staggering to consider. Search Engines are a reliable metric which find billions of results that include websites hosted around the world. Countless websites are being created and bringing with them even more content that needs to occupy room somewhere.

With all this activity going on, exactly how much data are we talking about in the ‘Global Datasphere’? This is the total data created, captured or replicated, but not necessarily being stored.
In 2017, NodeGraph reported that there was there was 2.7 Zettabytes (ZB) of data in our digital universe. PwC believe that this reached 4.4 ZB in 2019, but more staggeringly predict that this will grow to 44ZB of data this year. In fact, IDC predicts the world’s data will grow to 175 ZB by 2025! This sounds a ridiculously high amount, but just how much data is it?

Let’s break down just how big a zettabyte is:

When this baby hits 88 miles per hour

Got all that? We could go bigger! But instead to maybe make it a little easier to visualise just how much data there may be in the world in five years, here are some examples from IDC:

Looking at all these statistics, it’s clear how global data has exploded recently and will continue to grow exponentially. However, the figures for 2019 and even early 2020 are already out of date, as the amount of data is already so large we can hardly keep up. Whether we will reach the enormous projected target 175 zettabytes by 2025 remains to be seen, but one thing is certain: we will have generated more data than ever before. With more data than any person could possibly experience, the web has become more than the sum of its content. 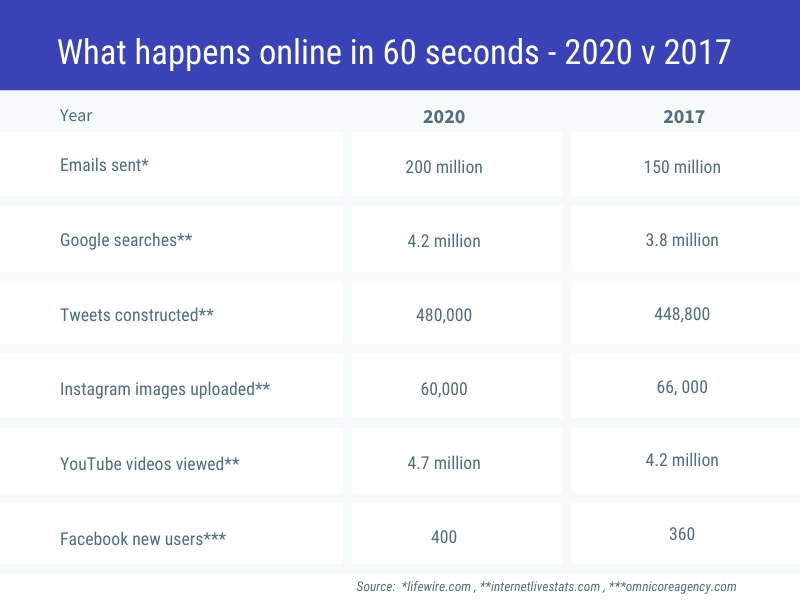